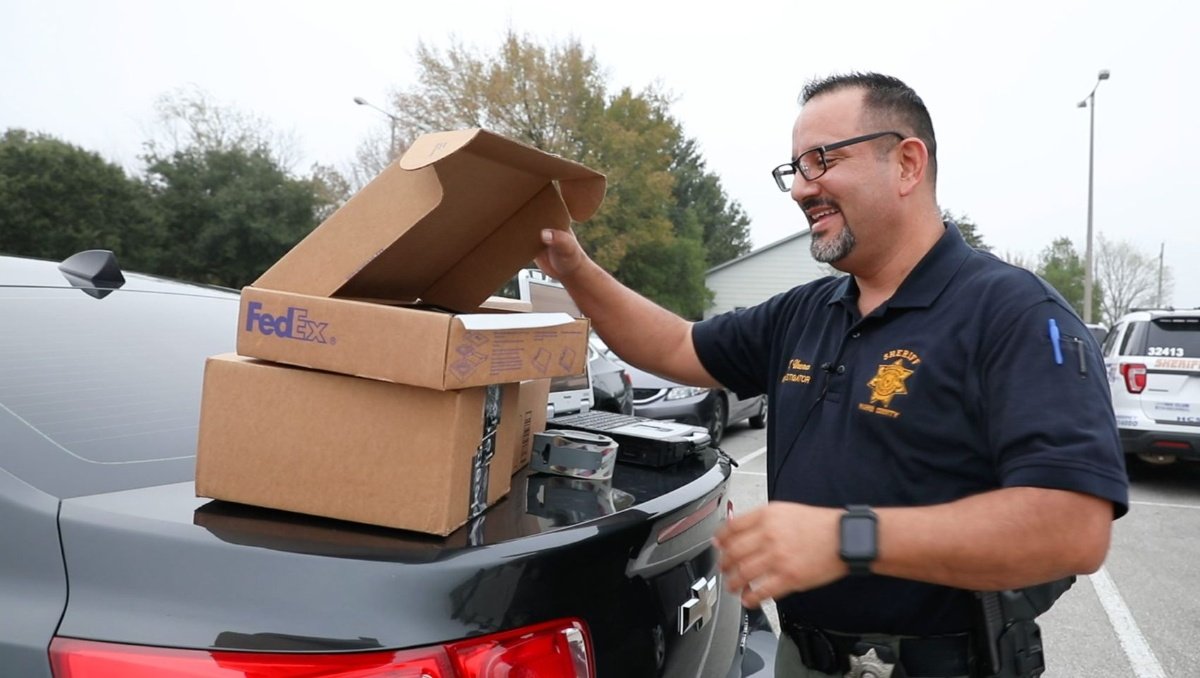 The Harris County Sheriff’s Office is ramping up efforts ahead of the holidays to combat package thefts across the county.Black Friday and Cyber Monday kick off the holiday shopping season, a gold mine for porch pirates – or thieves who steal packages outside resident’s homes. This year, retailers are anticipating an uptick in home deliveries due to the ongoing pandemic.As Harris County residents start receiving more mail and packages, the Sheriff’s Office’s Burglary and Theft Unit investigators are leading several porch pirate sting operations in Harris County with support from the agency’s patrol units and U.S. Postal Inspectors.“Beyond catching porch pirates who come into our neighborhoods to snatch our holiday packages, our goal is to also deter this activity from taking place by letting would-be package thieves know that we’re out here,” said Burglary and Theft Investigator Javier Ureña. “This is one example of many proactive policing efforts aimed at reducing crime in our communities.”Burglary and Theft Unit investigators will be placing multiple decoy packages with a tracking device on residential porches to help investigators identify and locate the perpetrators. If a porch pirate takes one of the GPS-tracked packages, investigators receive an alert and can follow it in real-time. And, when the porch pirate opens the package, the camera in the tablet will start taking photos of the suspect, giving investigators a description of them.The sting operations target the most at-risk areas in Harris County identified from theft reports and tips from shipping companies. Last week, Investigator Ureña led an initiative in the Westlake community in the Katy area. Although no porch pirates took the bait, it allowed investigators to test their new equipment.Harris County residents are urged to take steps that will help avoid packages being stolen from their doorstep, such as signing up for tracking notifications, retrieving packages as soon as they arrive, or requiring a signature for delivery. Instead of having a package delivered to your home, investigators are asking residents to consider other delivery locations to pick up and return packages, including Amazon Hub Locker locations and postal boxes.Mail theft is a federal offense punishable with up to five years in prison and fines. Call the Sheriff’s Office at 713-221-6000 to report stolen packages.Media note:
• Deputy Ureña takes us on a porch pirate initiative in the Katy area: youtu.be/SMTm1tc9WHA
Reply
* Reactions disabled on political threads.
What are your thoughts? Log in or sign up to comment Log in » Sign up »

Good!! I hope they catch a ton!!
Reply
* Reactions disabled on political threads.

@AtascocitaDotCom : Fantastic. I hope they catch a ton of these losers. I can't stand a thief.
Reply
* Reactions disabled on political threads.

Good... I hope they are shoot on sight
Reply
* Reactions disabled on political threads.

There are some videos on you tube of rigged packages. They contain motion sensors, tracking devices, and multiple cameras. The piece de restance is when opened ( hopefully at the pirates house) the box spins out a cloud of glitter and emits an obnoxious smell all captured by the cameras and transmitted back .
Reply
* Reactions disabled on political threads.

Good... I hope they are shoot on sight
@sandman : Well it does say they will take photos!
Reply
* Reactions disabled on political threads.

Isn't it a felony if you get caught now? I think the delivery people need to be retrained to put the packages in a place where people can't see them from the street. You wouldn't believe where they put them in front of my house. I've actually seen a package in the middle of my sidewalk between the house and the street. Really clever. Also the only one that rings my doorbell is the mail lady. I'm home most of the day and I look out when I hear the doorbell ring. The other deliverers don't bother to ring my doorbell. They just drop the package and run.
Reply
* Reactions disabled on political threads.