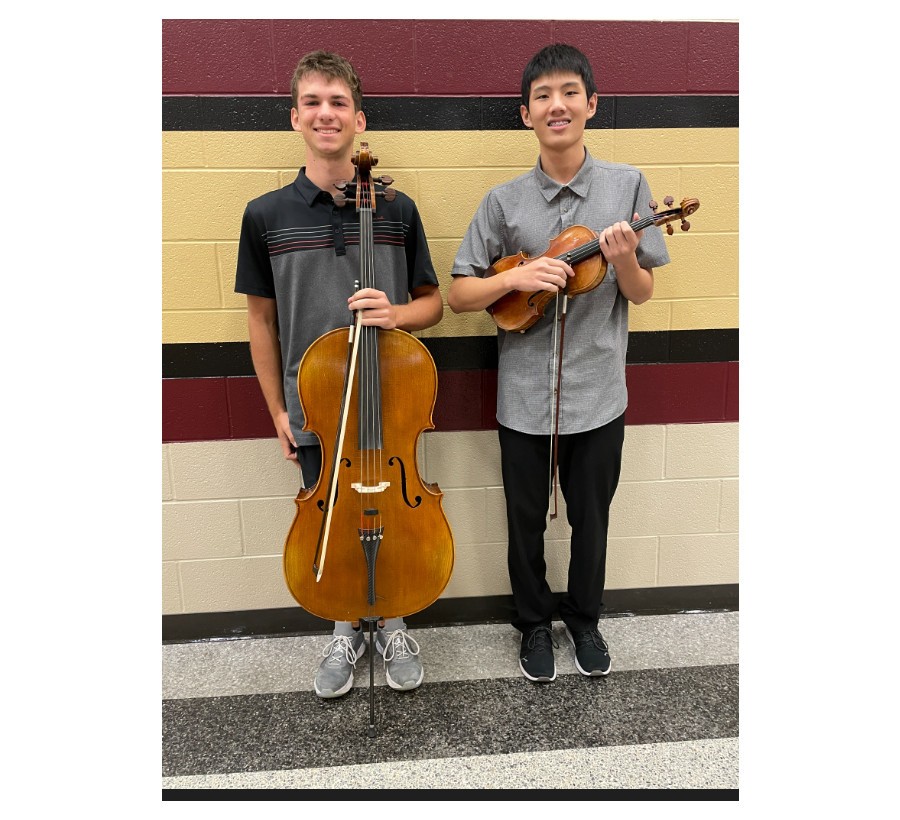 From Humble ISD:
By Joshua Koch | November 18, 2022Zachary Houlton and Thomas Feng are historymakers at Summer Creek High School. Houlton, who plays the cello, and Feng, who plays the violin, became the first-ever All-State Orchestra members from the Summer Creek Orchestra with their selection. “I hope it benefits this program as a whole,” Houlton said. “I hope it makes a name for Summer Creek Orchestra.” Along with the Summer Creek selections, Zach Argomido (violin) of Atascocita High School and Slava Tchoubko (bass) of Kingwood High School were also selected to the Texas Music Educators Association (TMEA) All-State Orchestra. Houlton and Feng started playing in the orchestra together when they were in the sixth grade at Woodcreek Middle School. Now, as juniors at Summer Creek High School the duo continues to play together in the orchestra at school. In January, they will once again be together playing in the TMEA All-State Orchestra. “I didn’t expect I would make it, honestly,” Feng said. “I think this is from all the process that comes before it. To be All-State, you have to be so technically perfect. So, I spent a lot of time being technically perfect.” Houlton added: “I tried out my freshman and sophomore year, but this is the first time I made it and that feels really good because I’ve been trying for so long. I definitely put in the work this year and I think the results reflect that.” It was on the night of Sunday, November 13, 2022, that both Houlton and Feng’s cellphones rang with a call from Summer Creek Director of Orchestras David Irish, who is in his second year of running the program. His first question to both when they answered - “How does it feel to be an All-State musician?” “It’s the happiest call we get to make,” Irish said with a smile. “We’re thrilled anytime kids do anything that is great. But for these two, this is the biggest accomplishment we have for musicians in Texas. They were through the roof.” When Feng’s phone rang, he initially sent the call to voicemail. He was performing with the Houston Youth Symphony at the time. He received a text from the same number telling him it was Mr. Irish and to give him a call.Once finished with his concert, he called back his high school orchestra director and received the news. “I was taken away. It was amazing,” Feng said about receiving the news. “After that concert and this news, it was just overwhelming.” Houlton received the same call and was shocked initially by the news. “I didn’t expect to make it because it's a very competitive process,” Houlton said. “It was relieving because I put a lot of work in.” The All-State audition is a one-take shot at getting your performance perfect to record to impress the judges. There are six cuts chosen, three from the two etudes that are chosen at the beginning of the summer and the other three are orchestral excerpts that will be performed at the TMEA Convention. The six pieces total about 10 minutes of playing and you get one chance to record it. “As soon as I started playing, I wasn’t focused on the fact that I had one shot at it. I was focused on the task at hand, which was to execute the best I could.” Not only is it neat that one Summer Creek Orchestra member made the All-State list but two who have been friends since middle school and now get to experience this accomplishment together on the state’s biggest stage. “Thomas and I have both worked really hard this year and this was our goal,” Houlton said. “To do it together just makes it better.” Feng added: “We both really wanted to make it. It’s just a coincidence that we’re in the same grade. It was just so exciting.”
Reply
* Reactions disabled on political threads.
What are your thoughts? Log in or sign up to comment Log in » Sign up »
Replies:
No replies yet. Be the first to respond below!
Post a comment »
** Would you be interested in keeping up to date with news & events going on in the Atascocita area? Consider supporting an alternative social media platform for Atascocita by creating an account today! (it's fast, easy, privacy focused, and free!)