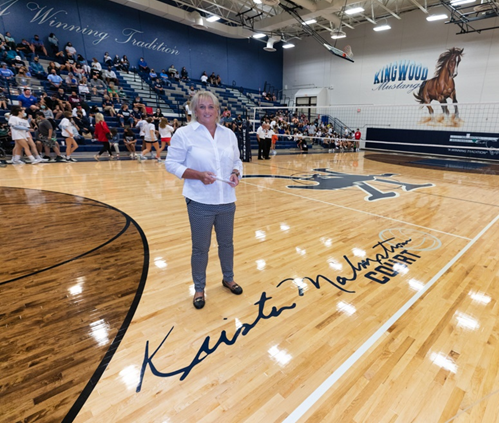 Kingwood High School recently held a ceremony naming its volleyball court for former Head Volleyball Coach Krista Malmstrom. “It is truly an honor to have the KHS volleyball court named for me,” Coach Malmstrom said. ”I am grateful for all the memories.” Coach Malmstrom served 20 years as a head coach for KHS volleyball winning 19 District titles, five regional titles, five state tournament appearances, and state title games in 1991 and 1996. Former KHS athletes recalled how her coaching has had a lasting impact on their lives. “I was blessed to be one of her players at KHS,” Tara Childress, former KHS volleyball player and current fourth grade teacher at Centennial Elementary, said. “Krista is the reason why I got into coaching and teaching as a profession.” Sharon Sisco, PE coach at Riverwood Middle School, attended KHS and went on to play softball at Sam Houston State University. “Thanks for all you’ve done for Humble ISD and thanks for all you’ve done for me,” Sisco said. Former players and coaches from as far back as the 1990s were present to honor the legendary coach at Kingwood High School on Sept. 23, 2020. Former KHS assistant basketball coach Rusty Odom, KHS volleyball coach Christie Mewis, and Kingwood Park High School volleyball coach Kelly Miser presented Malmstrom with a commemorative plaque prior to the start of a volleyball game between KHS and Kingwood Park High School. Coach Malmstrom originally planned to coach the Lady Mustang basketball team when she moved to KHS from Creekwood Middle School in 1984. Two years later, she was asked to coach the volleyball team after the head coach stepped down. She agreed to serve as an interim head volleyball at first, but her success quickly changed her job title.Under Coach Malmstrom’s leadership, the Lady Mustangs earned 19 playoff appearances in her 20 years as head volleyball coach. Coach Malmstrom’s success translated into numerous awards and honors. She was given the 1996 Houston Area Coach of the Year Award. She was a two-time coach at the UIL All-Star Volleyball Game, and she was inducted into the Texas Girls Coaches Association (TGCA) Hall of Fame. Coach Malmstrom also used her coaching wisdom as president and volleyball committee member of the TGCA. UIL officials said the court renaming is fitting for Malmstrom. “A well deserved honor to a coach who gave back so much,” Dr. Susan Elza, UIL Director of Athletics, said. “I always admired her selfless approach to the profession and her passion for kids.”Malmstrom joined Humble ISD in 1981 and retired in 2016 as the district’s Co-Director of Humble ISD Athletics.You can view the court naming ceremony along with Texan Live's interview with Coach Malmstrom at Texanlive.com. The ceremony begins at 47 minutes into the clip and the interview can be found at 1 hour and 4 minutes into the clip.
Reply
* Reactions disabled on political threads.
What are your thoughts? Log in or sign up to comment Log in » Sign up »
Post a comment »